Skip to Main Content
New Feature! To download maps for offline use and create comparisons in other applications, visit the section Maps For Download.
Prof. Justin Levitt's Doug Spencer's Guide to Drawing the Electoral Lines
Find a State

Select a state for detailed information and criteria.

Redistricting is the way we change the districts that determine who represents us.

Every member of the U.S. House of Representatives, most of our state legislators, and many of our local legislators in towns and counties are elected from districts. These districts divide states and the people who live there into geographical territories. Districts are occasionally the same size as the whole jurisdiction: members of a local school board, for example, may each be elected from an area with the same boundaries as the overall school district the board governs. Most of the time, though, district lines subdivide territory, so that there are several districts within one city or state, and representatives for each separate district. When that happens, we need some way to decide where the lines will be drawn.

In the colonial era, many districts were defined by the borders of towns or counties, or groups of towns and counties. The legislature was formed by assigning a certain number of representatives to each of these districts. So, for example, New York State’s 1777 Constitution assigned nine representatives to New York “city and county,” ten to Albany “city and county,” four to Queens County, two to Kings County, and so on. And the infamous Massachusetts gerrymander of 1812 was really just a particular configuration of Massachusetts towns and counties. 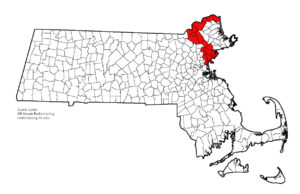 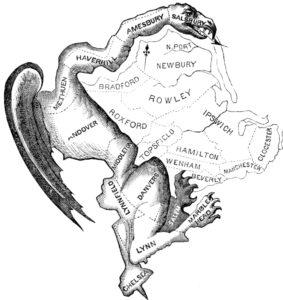 As the country’s population grew, it did not grow equally, and some towns and counties grew much larger than others. Some jurisdictions kept pace with changing population, shifting the number of representatives assigned to each district, or reconfiguring district lines; others did not. Sometimes, districts stayed the same despite population shifts because of an underlying philosophy: several state Senate systems were modeled after the federal Senate, with representation for counties as such rather than the population therein. Sometimes, districts stayed the same because of political advantage or neglect: from 1901 through 1961, the Tennessee legislature simply ignored a state constitutional requirement to redraw district lines. In either case, the result was that some districts grew much larger than others. By the 1960s, for example, Los Angeles County (the largest district in California) had 422 times as many people as California’s smallest district. And because each district in California’s state senate elected one Senator, each person in the smallest district enjoyed 422 times the Senate representation of each Los Angeles resident.

In a series of cases starting in the mid-1960s, the Supreme Court decided that this sort of population disparity violated the U.S. Constitution. It required roughly equal population for each legislative district. This meant that district boundaries would have to be periodically readjusted, to account for new population information. So now, after the Census is conducted at the start of a new decade, district boundaries have to be redrawn.

This is the process we know as redistricting.